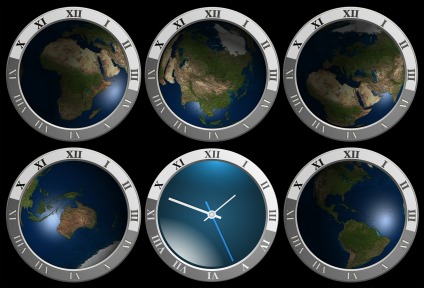 James Gleick posits that the world should remove its various time zones, given the confusions they cause. Instead, it is argued that our timings should reflect how our biological clocks obey solar movements, a permanence that is in contradistinction to the arbitrary, changeable constitution, of numerical, clocked times.

The time-zone map is a hodgepodge — a jigsaw puzzle by Dalí. Logically you might assume there are 24, one per hour. You would be wrong. There are 39, crossing and overlapping, defying the sun, some offset by 30 minutes or even 45, and fluctuating on the whims of local satraps.

Let us all — wherever and whenever — live on what the world’s timekeepers call Coordinated Universal Time, or U.T.C. (though “earth time” might be less presumptuous). When it’s noon in Greenwich, Britain, let it be 12 everywhere. No more resetting the clocks. No more wondering what time it is in Peoria or Petropavlovsk. Our biological clocks can stay with the sun, as they have from the dawn of history. Only the numerals will change, and they have always been arbitrary…

People forget how recent is the development of our whole ungainly apparatus. A century and a half ago, time zones didn’t exist. They were a consequence of the invention of railroads. At first they were neither popular nor easy to understand. When New York reset its clocks to railway time on Sunday, Nov. 18, 1883, this newspaper explained the messy affair as follows:

“When the reader of The Times consults his paper at 8 o’clock this morning at his breakfast table it will be 9 o’clock in St. John, New Brunswick, 7 o’clock in Chicago, or rather in St. Louis — for Chicago authorities have refused to adopt the standard time, perhaps because the Chicago meridian was not selected as the one on which all time must be based — 6 o’clock in Denver, Col., and 5 o’clock in San Francisco. That is the whole story in a nut-shell.”

Geoincidence that H. G. Wells invented his time machine then, nor that Einstein developed his theory of relativity soon after. With everything so unsettled, Germany created Sommerzeit, “summer time,” as daylight saving time is still called in Europe.

“There was much talk of relative time, physiological time, subjective time and even compressible time,” wrote the French novelist Marcel Aymé in “The Problem of Summer Time,” a 1943 time-travel story. “It became obvious that the notion of time, as our ancestors had transmitted it down the millennia, was in fact absurd claptrap” (Gleick 2016).