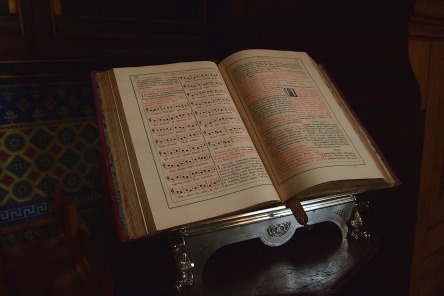 Defacto Design argues that religious conventions have contributed to shaping calendars which distance us from natural time. These artificial time structures is furthermore said to have perverted our impression of natural reality.

“The 12 month Julian calendar was inherited by the Christians some time around the 6th century then, in 1582, Pope Gregory the 13th reformed the 12 month calendar and it became known as the Gregorian calendar. It can therefore be argued that it is the Vatican’s calendar and the world lives on Vatican time.

The point though is the lack of reason, logic or intuition upon which this system is based. It remains devoid of methodology which stifles usability as attempts to calculate which days of the week correspond to days of the month make clear. It has no rational grounding, other than 365 days corresponding to one solar orbit, and therefore lacks any significant context: Why does a ‘new year’ begin on January the 1st? What relevance does that day have? Why isn’t the 1st day of the year on the solstice? What practical purpose do we have for months of differing lengths other than to disseminate global confusion? And why, in the UK, do we still change our clocks twice a year to encourage ‘day-light saving’ when it means children must walk to school in the dark?

The ultimate purpose of a ‘calendar’ is not to keep accounts but to synchronise. The Gregorian calendar disconnects humanity from the cycles of the planets and galaxies; from the universal order of ‘natural time’ and therefore nature itself. Jonathan Bate observes in his insightful book ‘The Song of the Earth’ that ‘thinkers from Rousseau (1) to the late-twentieth-century Greens have proposed that man’s presumptions of his own apartness from nature is the prime cause of the environmental degradation of the earth’ (2).

Our artificial time has twisted our perception of reality sufficiently for the Oxford English Dictionary to define nature as ‘the phenomena of the physical world collectively, including plants, animals, and the landscape, as opposed to humans or human creations’(3). Are we really ‘opposed’ to the plants, the animals and the entire system which led to our existence? Have we really out-evolved our environment to such an extent that we are no longer part of it?

The imposition of artificial time has perverted our fundamental perceptions of reality. Robert Greenway (4) concludes that if we can learn to ‘…live within the understanding that we are nature, that we cannot be separate from nature, and that an interactive awareness of our naturalness is the first step towards a vast range of wisdom now closed to us… we can return to the communion that this historic period of objectification has [denied] us’.

The Gregorian Calendar provides the main metaphysical frame of reference for humanity and as such its’ influence is unprecedented. It is single-handedly responsible for the perception that ‘time is money’ which perpetuates materialistic cultures in which greed and exploitation dominate.

The objective now is to realign our consciousness, with the synchronic order of natural time, by changing our metaphysical frame of reference and acknowledging ‘time’ as something other than ‘money’. This single issue lies at the heart of the “crisis of perception” which Fritjof Capra (5) suggests is the single root of our contemporary ecological crisis. The entire system of artificial time is fundamentally flawed; to progress, or arguably, for humanity to ‘survive’, we need a different system. Thankfully one based on natural time, which is not linked to any specific religion, has been tried and tested for thousands of years. It uses 13 months of 28 days, and is know as the 13 Moons.”